Okay, I have an urge to write, and to put content out there that’s not strictly related to the current situation, so let’s do that. This is not going to be a fancy blog post with amazing pictures (I shot these with my phone and under crap lights) and a precise recipe, just some stream-of-consciousness narrative on how to get a hard-to-mess-up-completely beef stew. If you want the high-effort, but actually worth it, version, there’s one here: Bœuf bourguignon.

Get some stew beef – typically the cheap cuts, that may be more or less tough and have more or less fat/weird parts. For this round I got one piece of « meager stew beef » (which would be tougher without the long cooking) and one piece of « mixed stew beef » – which is typically fattier and has more squishy parts. Cut it in large cubes (okay, some kind of approximately 6-faced polyhedrons) – I like something along the lines of 3-5cm side, I think. Try to keep them roughly equal, but don’t fret.

Get your largest pot – mine happens to be my cast iron dutch oven, and there’s something very satisfying in cooking anything in that, but any pot ends up working – this dutch oven is a fairly recent addition to my cookware, but I’ve been making stew for as long as I’ve had my own kitchen. Put some fat at the bottom – oil, butter, lard, whatever floats your boat, and brown all the pieces of meat. You probably want to do several batches, in order to not crowd the pot – I had roughly 2kg of meat and it took me 4 batches. You might want to dust the meat with flour – it tends to brown better, and it eventually helps with the thickness of the sauce, but it also tends to stick more to the bottom of the pan, which makes it a bit more stressful. I couldn’t decide between putting flour or not putting flour, so I put just a little, which meant that my meat was stickier to the bottom of the pan and the sauce didn’t really thicken. Win-win.

Once all the meat is browned, you may want to add a bit more fat to the pan if it’s all out, and then throw in a few onions. Add some bacon too, because bacon makes everything better.

Throw in some mushrooms while you’re at it. You could also add a carrot or two there – always a popular choice.

Let everything in there soften and brown for a bit. Then add back the beef.

Stir everything together, and that’s when you can add liquid. I started with a cup of chicken broth that was in my freezer (I made broth two months ago, and I’m very happy I did). Don’t worry if you don’t have any – it’s probably helping for the overall taste, but it’s not critical. You can also add (on top of or instead of) herbs, typically a bouquet garni, or whatever aromatics you think would work (thyme, laurel, rosemary, garlic – all of these would probably work).

Once you have a bit of liquid in the pot, scratch the bottom of the pot with a spatula – should help liberate all the tasty bits that gathered in there while browning everything (and have them in the final sauce).

Open a bottle of red wine and check that it is appropriate. Rule of thumb: don’t cook with something you wouldn’t drink. First of all, it’s going to be less tasty; second of all, if you have some left, you’re going to drink it anyway with the meal, soooo.

The second point was not much of an issue for me, because I ended up needing the whole bottle in there. Cover the content of the pot with liquid – if you don’t have enough red wine, add some more broth or water. Bring to a boil.

Once it’s boiling, reduce the heat below, add a lid to the pot, and let it simmer for a couple of hours (or more). Double check at the beginning of the cooking that it’s not boiling too heavily (since there’s a lid on, this typically happens at lower heat on the stove!), and let it be for a while.

A few hours later, you have a very tasty dinner, and probably a fair amount of leftovers (unless you’re cooking for 10+ people). If you’d like a thicker sauce (the one I had was fairly thin, you can strain everything out of it and reduce it on high heat for a while. I was definitely too lazy (and it was getting late) to do that yesterday.

Once cooled down, transfer to freeze-ready containers, add a label on it, and stick them in the freezer for a later day.

Don’t be me when doing that: I tried to spare time by tipping the pot over my containers to get some sauce in it, and I ended up having to clean a sauce flooding in my kitchen, that was annoying.

More annoying even is that on that evening I ended up having to clean a SECOND flood in my kitchen. When I went to put my stew boxes in the freezer, I realized that one of my chicken broth bags had leaked – it was probably not sealed correctly 😦 Hence, more mess to clean. So I picked the drawer, emptied it and put it in the sink to clean it. At some point I went « WAIT, WHAT, WHERE IS ALL THAT WATER COMING FROM?? » – turns out, my freezer drawer are not watertight (the facade is clipped on them). Which means: second kitchen flooding in one evening.

But at least I have tasty stew for comfort 😀

All right, this one is a tough one for me. My parents are proclaimed « kings of the rata », so there’s some high level there. And I’m not there yet, but I’ll explain why in this post. First thing, what’s « rata » ? Even in French, it’s not that common a word. It’s, however, something that I always heard of at home, in various forms – tomato rata, turnip rata, beans rata. So, essentially, a stew with vegetables, potatoes and meat, and it’s tasty. There. And since, on the one hand, it’s probably a dish best served in non-canicular weather, and on the other hand, it’s still possible to find some half-decent tomatoes, it’s probably the right moment to post this recipe, even if the realization was already a while ago. So, today, tomato rata. 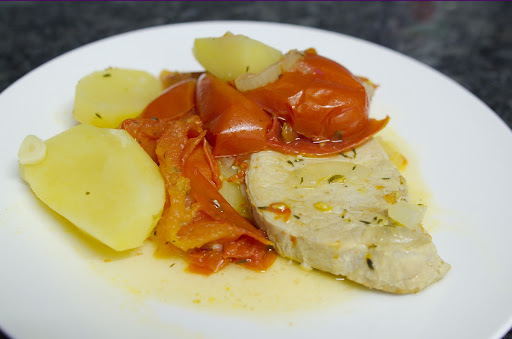 END_OF_DOCUMENT_TOKEN_TO_BE_REPLACED

The 2010 April Daring Cooks challenge was hosted by Wolf of Wolf’s Den. She chose to challenge Daring Cooks to make Brunswick Stew. Wolf chose recipes for her challenge from The Lee Bros. Southern Cookbook by Matt Lee and Ted Lee, and from the Callaway, Virginia Ruritan Club.

The proposed recipe contains chicken, rabbit, bacon, miscellaneous vegetables, beans and corn. Both recipes of Brunswick Stew are available as a PDF file. 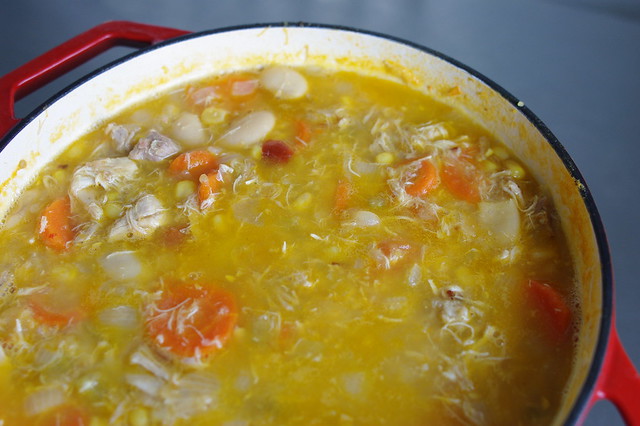